This catalogue was published on the occasion of Platform in KIMUSA held from September 3 - 25, 2009. The catalogue comes in two volumes, with 101 entries correspondingly numbered across the two books. The white volume contains maps and texts, including artists' statements,  while the blue volume contains the images.  The publisher of the catalogue Platform in KIMUSA is SAMUSO: Space for Contemporary Art. SAMUSO: Space for Contemporary Art is an initiative curatorial office founded in 2005 based in Seoul, Korea. SAMUSO presents exhibitions, educational programs, public lectures, symposia and publications pertaining to contemporary art.

Under the idea that contemporary visual art should be closely linked to our real lives in cities instead of remaining as 'art for art’s sake,' Platform 2009 explores the relationship between art and cities under the three key ideas of ‘public,’ ‘space,’ and ‘life.’  Platform 2009 will not only include exhibits but also permanent or temporary public art projects, public programs consisting of symposia, seminars, workshops, lectures and educational programs throughout 2009.

Under the theme 'Void of Memory,' Platform in KIMUSA of Platform 2009 is comprised of exhibitions, events and lectures that rediscover spaces which have been unused or forgotten for a period of time. Kimusa, the old site of the Defense Security Command (DSC) in Sogyeok-dong, is a meaningful place historically, architecturally, and culturally, because it has undergone several transformations up until today. Popularly known as 'Kimusa,' it was once also the location of Gyujanggak (Royal Library), Sogyeokseo (National Taoist Temple) and Saganwon (Office of the Censor-General) during the Joseon Kingdom (1392-1910). The building is registered as Modern Cultural Property No. 375. The Ministry of Culture, Sports and Tourism has announced plans to turn it into the National Museum of Contemporary Art in Seoul by 2012.   Platform in Kimusa 2009 is part of the transition. There are four main sections: P1 is the main exhibition; P2 presents artists recommended by other artists; P3 features a series of projects curated by institutions; and P4 shows the visions of international art institutions. Public Programs and special events are also held throughout the project.

Revealing and Vanishing: Consciousness over Control, Memories and New Encounters 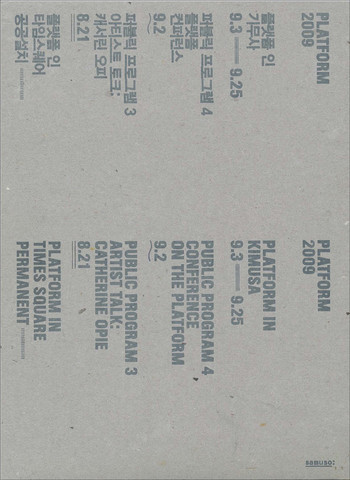 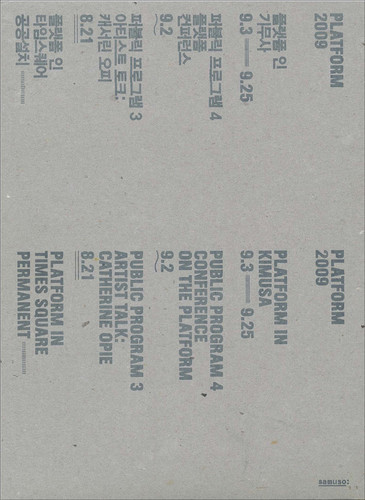 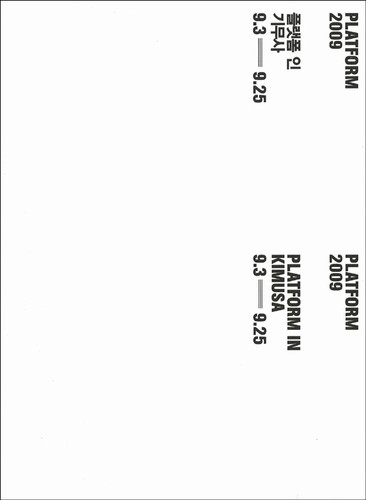