This book was published on the occasion of the exhibition of the same title at the Whitney Museum of American Art, New York, from July to October 2003.

'Timely and compelling, "The American Effect" explores the wide range of global perceptions of American society and culture in the work of artists from around the world. Encompassing both romanticized and demonized visions of the United States, these works - by 47 artists and filmmakers and three collaborative groups from 30 countries in Europe, Africa, Asia, Australia, South and North America - date from 1990 to the present and include drawing, photography, film, installation, painting, sculpture, video and Internet art.
As America increasingly comes to terms with how it is perceived abroad, this book and the exhibition it accompanies at the Whitney Museum of American Art look at how artists, primarily non-American, depict, imagine, and respond to America and its presence to the world. The works convey a range of responses, from anger and antagonism to affection, warmth, and humor. Essays by well-known writers touche on issues raised by the art, and curator Lawrence Rinder discusses each artist's work in context.' - from back cover.

Only the names of Asian artists are listed below.

How I Met America 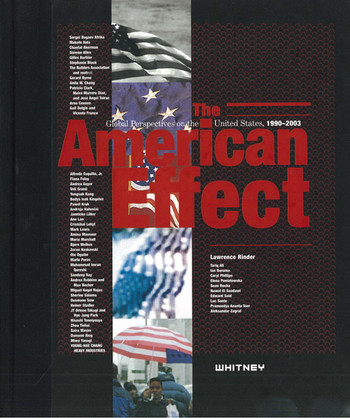