This is the catalogue of the second edition of the Johannesburg Biennale in 1997, entitled 'Trade Routes: History and Geography', under the direction of artistic director Okwui Enwezor.

'Trade Routes: History and Geography is sited around the axial vector of economic globalisation. It is an attempt to elaborate the full measure of its debates, particularly those that rise out of the analysis of modernity as a circulatory system of exchange and site of translation, as transnational/cultural transactions that do not always arrive in neatly tied packages, as the South African-born British critic, Sarat Maharaj wonderfully put it. In this manner, all journeys are not only incomplete, they form part of the vast ways the world is encountered and translated. This project then comes at a time when the entire notion of history is being constantly questioned and revisited. Hence, the elaboration of the debates in which the Biennale is necessarily enmeshed, could be seen as a kind of open network involving different levels of cultural significations, translations, transcriptions, phenomenological and social encounters, mobility of ideas, contestations of political methodologies, etc.' - from Enwezor's introductory essay featured in the publication.

In total six exhibitions took place during the Biennale. The project ceased one month before the originally planned date due to the lack of funding from the city of Johannesburg. This second edition is also the last one of the Johannesburg Biennale.

Please note that only Asian artists participating in the Biennale are listed.
Alternative title 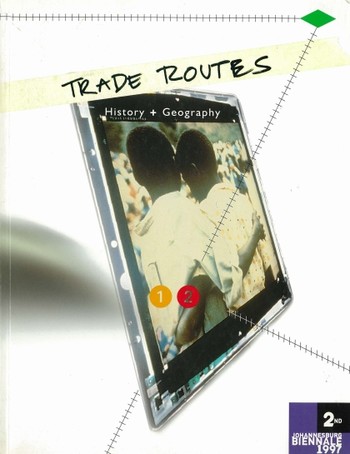