'No other artist has had greater influence on the use of technology in art than Nam June Paik; he prophesied changes that would shape the ideas, ‘Participation TV’, ‘Random Access Information’ and ‘Video Commune’. "Transmitted Live: Nam June Paik Resounds" celebrates the 50th anniversary of Paik's first solo exhibition, "Exposition of Music - Electronic Television" (Wuppertal 1963), when the artist brought television in the realm of art for the first time, presenting it as a tactile and multisensory medium. As part of the counter-cultural movements of the 1960s, Paik believed that artists should humanise technology, get their ‘fingers in and tear away the wall’ of the establishment. Paik, a trained musician, treated technology as a material part of his repertoire, which later expanded to include video, satellite transmissions, robots and lasers.
Invited by the Edinburgh International Festival 2013 with a grand theme of ‘art and technology’, Nam June Paik Art Center will fill Talbot Rice Gallery, University of Edinburgh, where such notable historical figures as Charles Darwin and James Clerk Maxwell attended, with electromagnetic waves to reverberate with the diverse forms of Paik's practice. Drawn primarily from the Nam June Paik Art Center's collections including videos, sculptures, photographs and archival materials, the exhibition is intended to shed new light on the artist Paik who was a rigorous but always humorous thinker and experimenter at the same time. As first Paik exhibition in Scotland, birthplace of electromagnetic theory and television technology, "Transmitted Live" will demonstrate how revolutionary the artist remains for contemporary audiences in encouraging creative engagement with technology.' - from organiser's website.

Includes a biography of the artist.

Artists who gave performances at the opening of the exhibition are also indexed.
Access level 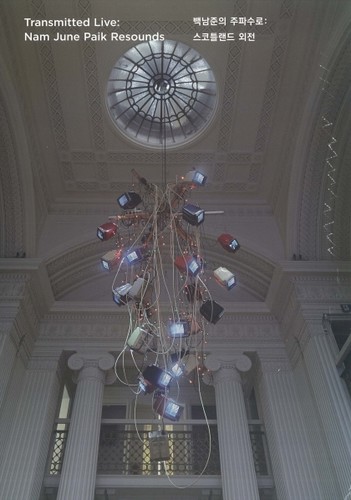