Shortlist | Alternative Publishing Platforms of Experimental Art in China: From the 1990s to Mid-2000s

Shortlists offer thematic selections from AAA’s Collection, including overviews and annotations by invited contributors. The following Shortlist by AAA’s Research Associate Xie Congyang focuses on the role played by alternative publications in promoting experimental art in Mainland China from the 1990s to mid-2000s.

This bibliography aims to explore how, in Mainland China, unofficial periodical publications served as an alternative platform for circulating experimental art. This selection represents a wide spectrum of nature, format, and content. Through this complexity, the following questions can be asked: why were such unconventional approaches of publishing needed, and who used them? How did these publications extend the field and style of art writing? How did the shift in art writing inscribe artist reactions to the ever-changing art ecology? How was experimental art in China accepted and discussed in a wider public beyond the art circle?

From the early 1990s to mid-2000s, these publications have played a key role in constructing the field of discourse for experimental art. Prior to this period, discussion of art in China was highly concentrated in a few officially approved art magazines, including Fine Arts in China (Zhongguo Meishubao), The Trend of Art Thought (Meishu Sichao), and Jiangsu Pictorial (Jiangsu Huakan). From 2005 onwards, under the demand of the expanding art market, a larger number of commercial magazines dedicated to contemporary art were established; at the same time, internet forums and personal blogs had become essential for information circulation, with platforms for contemporary art discourse undergoing a radical shift.

In the early 1990s, the influence of officially approved art magazines subsided due to restructuring or cancellation, as well as a general contraction of editorial freedom. More importantly, the authoritarian status of official art magazines became increasingly objectionable to experimental artists. As their discontent grew with the “interpretive domination” imposed by certain art critics and editors, they began to find ways to “occupy” existing publishing platforms, or simply create new ones, in order to make their voices heard. Meanwhile, as the material conditions for experimental art activities remained extremely difficult (at least, before the mid-2000s), printed materials functioned as both a space and method for artists to work and communicate.

These factors motivated practitioners of experimental art to navigate within or beyond the country’s administrative scheme of publication, seeking possibilities to speak for themselves. As Mainland China enacted strict censorship, all edited content required approval by authorised publishing houses in order to obtain legal license for printing and sale. However, in the early 1990s, especially in southern cities such as Shenzhen and Guangzhou, a favorable condition for individual publishers to circumvent censorship emerged, when some private-run factories were willing to secretly print content not approved by any publishing house. Therefore, some art practitioners decided to independently conduct the whole publishing process—from fundraising, editing, printing, to distribution. A notable example was the Hei Pi Shu (Black Cover Book) series. Symbolising their unyielding spirit, the inspiration experimental artists drew from this book series was so strong and long-lasting that, even several years after, echoes were still found through the editorial format of various successors, among which were two independently published magazines, Culture and Moralities, founded by artist and writer Gou Hongbing in 1996, and Foam, founded by artist and novelist Wu Youming in 2000. Both magazines feature experimental works of artists and writers that were not accepted by mainstream art media.

For artists experimenting with an emerging art form, their practices might not fit into any existing categories. In 1996, artists Rong Rong and Liu Zheng established New Photo, a self-published magazine that presented photography not merely as a means of documentation, but also as a distinctive art form. In this case, launching a publication can be considered as an act of naming, as it articulated new forms of photography and consolidated previous sporadic individual efforts under a recognisable term.

Other publishers, however, sought to spread their work into a wider audience through relatively formal ways, while maintaining a certain degree of editorial independence. In 1994, Xu Hao, a young officer of the Yuehai sub-district office in Shenzhen, founded Street, a magazine that broadly reported current affairs and urban culture. With his excellent social skills, Xu, who ambitiously aimed at creating a leading news magazine in China, obtained substantial financial and administrative support from higher-level governmental sectors in Shenzhen, enabling Street to be distributed nationwide through the postal subscription system. That same year, Jiang Yuanlun, then editor of Literary Newspaper, founded Avant-Garde Today. With private sponsorship, Jiang traded with publishing houses for their service of licensing and distributing the magazine. Instead of one single serial publication number, a series of book numbers were applied for each issue of Avant-Garde Today, so that the more difficult and time-consuming approval process for serial publication numbers was avoided. Avant-Garde Today was thus published as a series of books and sold in bookstores.

Experimental art gained visibility and exposure through both magazines because art practitioners were invited to join their editorial boards. Entrusted by the Founder-in-Chief and Editor of the publication, board members, who were professionals from different academic backgrounds and based in different cities, enjoyed great freedom in deciding on content. These publications were simple in organisational structure, yet contained more eclectic types of writing. Therefore, although the aesthetic inclination of these magazines might be ambiguous and inconsistent when compared to professional and official art periodicals, they encouraged more flexible and playful ways of writing. For example, articles on the 2000 Shanghai Biennial published in Avant-Garde Today (no. 11) were more playful, in stark contrast with the more formal and “official” writing in Jiangsu Pictorial (no. 232; no. 240). Moreover, with a larger content scope, these magazines also enabled experimental art to reach a wider audience beyond the small circle of art practitioners.

The magazine industry in China reached an apogee at the turn of the century. In some commercial magazines, editorships were offered to art practitioners, as the investor-publishers aimed to use experimental art as an organ of marketing. Although these magazines targeted the emerging urban middle class instead of art professionals, and the collaboration between art practitioners and their profit-oriented investors were usually unstable, some practitioners still managed to turn the publication into a transient but prominent platform for art discourse. Published in 2001, Next Wave was jointly directed by Qiu Zhijie, Li Xianting, and Wu Wenguang, featuring underground music events, experimental theatre, and independent documentary film alongside experimental art. The magazine contained a substantial body of primary documents of the serial art events generally referred to as “Post-Sense Sensibility.” Lengthy textual records, high quality images, as well as articles that provided theoretical background written by organiser Qiu Zhijie were published. The magazine is notable for its adoption of a unified editorial format to document art events, using “archive” and “report” as conceptual frameworks to incorporate curatorial statements, artists’ notes, as well as detailed descriptions of the scene written by participants in a first-person narrative. This emphasis on documentation and the strong sense of immediacy that permeated the magazine were unique when compared to dominating modes of art writing, in which artworks were usually interpreted through a crude theoretical framework by a distanced and arbitrary author, or being praised in an overly sentimental manner.

The fashion magazine Vision 21 was launched in 1999, with artist Sun Ping as Chief Editor, and Chen Tong, an artist and art writer with extensive experience in publishing, as Deputy Editor. The magazine not only gave coverage to art exhibitions and art works, but also brought artists into the spotlight. Through its carefully curated special features, the practices and opinions of artists on ordinary matters were revealed. In the second issue, a dozen male artists were invited to talk about their favorite female movie stars, while in his column “Avant-Garde 108,” Wen Pulin vividly portrayed the everyday life of his artist friends with a naughty tone. Underneath the magazine’s sensational appearance may have been a serious attempt to capture the social life of artists and their actual responses to material reality, though one can argue that such displays of the “real” were more or less artificial in a fashion magazine where artists become objects of the consumerist gaze. As a self-reflexive act in its fourth issue, the magazine dedicated a special feature to the critique against the “spectacularisation” of experimental art in a consumerist culture.

Towards the end of 1998, Lotus, a literary magazine, started its renovation with direction by art historian and experienced publisher Xiao Yuan, who decided to introduce textual works written by experimental artists to inspire creative writing in literature. For example, a 28-page feature accompanied by an analytical article was dedicated to selected paragraphs of Today No Water, a conceptual artwork and novel by artist Wu Shanzhuan (1999: no. 4). Wu Wenguang’s interviews with experimental artists were also published in full length (2000: no. 3). As a literary magazine, Lotus adopted a text-oriented layout suitable for longer prose, thus providing non-fragmented readings of Chinese contemporary art—as significant as it was rare, since using colorful images for visual impact was the prevailing trend among art magazines.

Dazzling or austere, uptight or playful, publishing efforts emerge from irrepressible impulses. It is hoped that through this bibliography, the various impulses that lie at the core of publishing efforts can be once again captured and understood.

This was published in various locations by different publication houses, including Joint Publishing (no. 1–4; no. 6); Tianjin Academy of Social Science (no. 5; no. 7–12); Shanghai People’s Publishing House (no. 13–14); Gold Wall Press (no. 15, no. 17); and New Star Press (no. 16). The magazine was published irregularly. Seventeen issues were published until 2013.

New Photo was originally independently published by Liu Zheng and Rong Rong in 1996, with four issues published until 1998. The magazine was reproduced in 2007 by Three Shadows Photography Art Centre.

The first twelve issues of the magazine were printed in Huangshi, Hubei, and then moved to Beijing starting from the thirteenth issue.

Two trial issues of the magazine were published in 1999. The magazine was published bi-monthly from 2000–2001, and published monthly in 2002 until it ceased publication.

Xie Congyang is a Research Associate at Asia Art Archive. 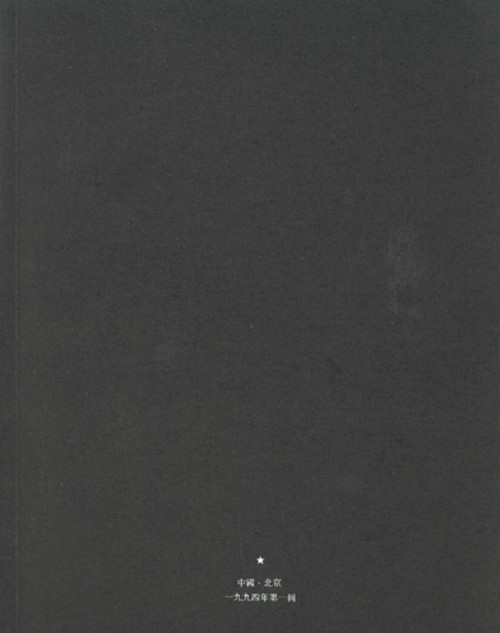 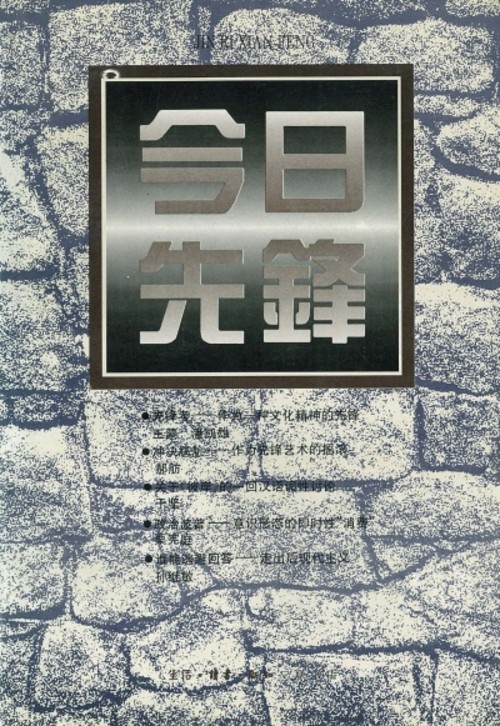 Culture and Morals (All Holdings)
Periodical

Culture and Morals (All Holdings) 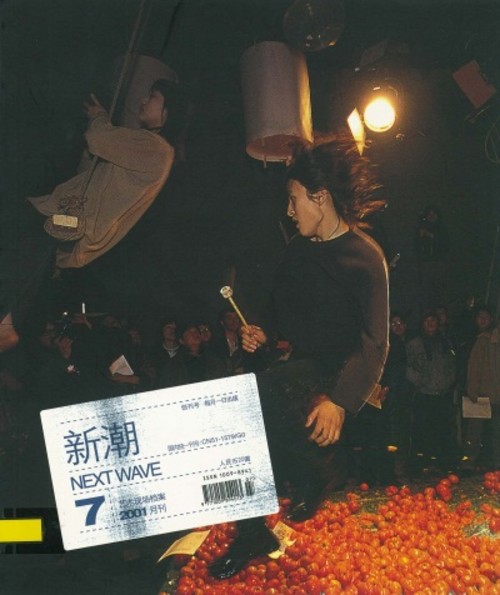