Comparative Contemporaries is a collectively edited web anthology project that brings together art writing from across Asia.  Initiated by Singaporean independent critic Lee Weng Choy, the project began with a symposium and workshop that engaged a number of writers in the field to select and discuss contemporary art writing in Southeast Asia. Its continuation attempts a tactical approach to producing anthologies specific to the region, providing an alternative to definitive surveys, authoritative mapping, and outside perspectives. 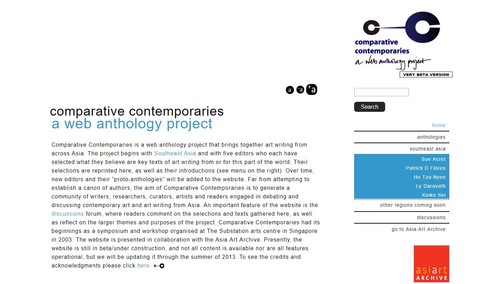 The web anthology on Southeast Asia is launched in May 2013. Future anthologies to enrich this platform are currently under development. Please visit the Comparative Contemporaries website.

In 2003, The Substation organized a one-day public symposium and two-day workshop called 'Comparative Contemporaries'. For that workshop, we brought together about 30 art writers and curators from the region to discuss contemporary art writing in Southeast Asia. Many of us have participated in conferences about contemporary art from Asia. Important as these events have been, too often we talk only about our backyards, and do not adequately engage each other's writing and research. It's not as if there isn't an awareness of this situation. For instance, at the Locus 2 conference, held in the Philippines in 2002, the artist-organizer Jay Koh said there may be plenty of contemporary art in the region, but we don't have a discourse yet. What also gets voiced at conferences is the desire for more art writing and publishing. There is a body of writing on contemporary art from Southeast Asia, but this body of work remains largely un-collated, insufficiently analyzed and poorly disseminated. Not that there haven't been institutional initiatives to address this problem — the Asia Art Archive, for example.

The motivation behind 'Comparative Contemporaries' turned on the question of how one would produce an anthology of existing writing on contemporary art from Southeast Asia. The categories one would employ to construct such a big fat book — like 'region', 'contemporary', 'canon' — these would have to be vigorously contested. 'Comparative Contemporaries' makes reference to the discipline of comparative literature. 'Complit', as it's sometimes called, asks its students to think about literature not only from differing national traditions, but also from different historical periods — often with the aim of questioning the concepts of 'literature', 'tradition', 'canon', 'nation' and 'history'. Likewise, the idea of 'Comparative Contemporaries' evokes an investigation of the art of different traditions and, at the same time, a questioning of the categories of 'nation', 'contemporary', and so forth.

'Comparative Contemporaries' also suggests something more provisional or tactical than a definitive survey or authoritative mapping. It reflects both the exploratory attitude underlying the imagining of this anthology, and the fact that we are still at the early stages of forming discourses about contemporary art from Southeast Asia. The advantage of complit is that it allows a great deal of freedom to explore relations between various literatures and disciplines not often studied or studied in conjunction. The paradigmatic image of a comparison is to conceptually, if not literally, bring two things together, side by side, and compare and contrast them. What I mean by 'Comparative Contemporaries' is precisely this bringing together of different fields side by side, to generate dialogue and to find, contest and build common grounds.

During a weekend in October 2003, about 30 writers and curators from the region met and discussed questions of historiography, of publics — we had one session as a case study of the Philippine scene — and then spoke directly to the practical considerations of putting an anthology together. On the one hand, there was skepticism if such a book would circulate widely; on the other, some of us felt such a book was urgent and timely. Others felt any kind of anthology would only reproduce obsolete structures of disseminating knowledge. We never did get down to making lists of who should be included, or discussing how to edit the book. Some of us thought the whole question of the anthology was best considered rhetorically, heuristically; others, like myself, still take the project literally.

For the 2006 'Comparative Contemporaries' follow-up project, what we aim to do, this time, is to initiate a website project (in collaboration with AAA) that will then become an open platform to further discuss and debate the questions concerning such a project. Our aim is to privilege the process of debating and developing an anthology project, and to establish a regional community of thinkers, rather than to fixate on producing a publication. A publication is not out of the question, but is a long-term rather than immediate goal. We are mainly interested in participants who are active in organizing and curating as well researching and writing — that is, persons who have worked on 'the ground' level to link practice and discourse, rather than those whose work is mainly academic.

The plan is to single out about five 'editors' to initiate the web project. Each of these editors will select what they believe are ten key texts of contemporary art writing from Southeast Asia, and we'll ask each of them to write an introduction essay to discuss their selections. These selections and introductions will then be posted on the AAA website. The desired outcome of 'Comparative Contemporaries' is to develop the website project as an important open-ended regional platform to further debate and expand the anthology project. Over time, new editors and new 'proto-anthologies' will be added to the website, and existing editors will expand their own anthologies. The Comparative Contemporaries Southeast Asia Web Project can serve as a model for other regions in Asia to be developed in the near future.