2.30pm | The Rising Tide (2008) with introduction by Director & Producer Robert Adanto
Robert Adanto’s The Rising Tide investigates China’s meteoric march toward the future through the words and work of some of its most acclaimed video artists and photographers. The Rising Tide captures this momentous time in China’s history while exploring the work of artists, who comment with intelligence, wit, foreboding and nostalgia.

6.30pm | From Jean-Paul Sartre to Teresa Teng: Contemporary Cantonese Art in the 1980s (2009) with introduction by Jane DeBevoise, Chair AAA Board of Directors
AAA premieres its documentary on the development of contemporary art in Southern China in the 1980s. The documentary considers the influx of books and popular culture following Deng Xiaoping’s open-door policy and the power of reading through interviews with key artists, critics and curators to include Hou Hanru, Wang Huangsheng, Chen Tong, Yang Jiechang, Wang Du, and members of the now defunct Big Tailed Elephant Group, Chen Shaoxiong, Lin Yilin and Xu Tan. Artists Through the Lens 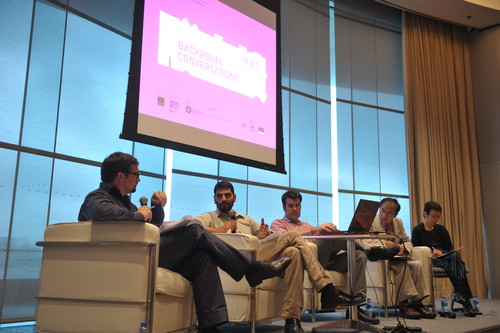 The Collection as Social Sculpture Okwui Enwezor | Off Centered: Modernity and Geopolitics of Contemporary Art