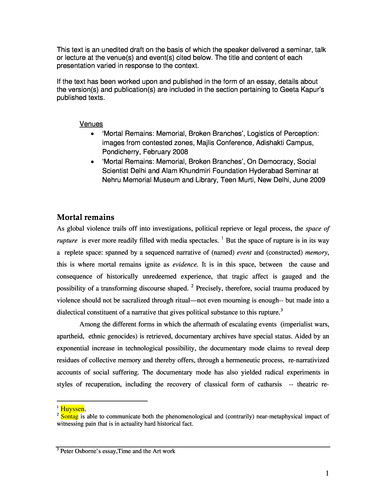 This document is an unedited draft on the basis of which art critic Geeta Kapur presented an illustrated paper during a conference organised by Majlis titled 'Logistics of Perception: Images from Contested Zones' at Adishakti Campus, Pondicherry, in February 2008.

A version of this paper was also presented at the Nehru Memorial Museum and Library, Teen Murti, New Delhi, at a seminar on democracy organised by Social Scientist Delhi and the Alam Khundmiri Foundation, Hyderabad, in June 2009.

Artists mentioned in the presentation include Atul Dodiya and Vivan Sundaram.