Part One of a series of notes by Oscar Ho, written for an AAA public programme on Facebook that coincided with the launch of his archive. The bilingual posts and Facebook interactions are available here on IDEAS Journal: Parts Two, Three, and Four.

In the 1990s, Hong Kong was in a state of disarray. After 1989, immigration waves rippled through the city. People were concerned whether the city’s system, routine, and culture would be preserved. While local culture had previously garnered little interest among Hong Kong arts and cultural practitioners, it slowly became a widely discussed topic by the 1990s. Local history and cultural identity were amongst the more pressing issues.

During the last century, cultural workers and academics have neglected local culture. Therefore, to catch up on its research under these unfavourable circumstances was no easy task. At the time, other than investigating overlooked local history, I was also searching for Hong Kong mythologies—in particular, mythological figures. Their tales exist in many communities and ethnographies, and while ancient lore is not “historically accurate,” these stories are goldmines filled with nuggets of metaphors and wisdom, and can reflect a community’s personality, experience, and history. On some level, they could even be more accurate than historical records.

Even though Beijing had entrusted its mainland scholars to rewrite the history of Hong Kong, the city was starting to search for its own history. Hong Kong people were attempting to piece together a local history through their own personal experiences. Authors such as Ng Ho and Lo Kam wrote histories of urban myths and folklore. In terms of popular culture, the sixties nostalgia film 92 Legendary La Rose Noire became an unexpected box office hit, and reflected the mentality of Hong Kongers at the time.

After searching far and wide for years for a local mythological figure, one was still yet to be found (though there are quite a few local ghost stories—after years of knowing each other, Yasi and I organised a “Ghost Culture Festival”). It was only by accident that I found a fully Hong Kong mythological figure. Its name was Lo Ting.

Lo Ting was half-man, half-fish, and was a strange creature that travelled between land and sea. It hailed from Daxi Mountain (modern day Lantau Island), and was mentioned here and there in historical and regional chronicles in Guangdong.

What was intriguing about Lo Ting was not only that it was the only local mythological creature I knew, but also that it was neither fish nor man. Being “in-between,” Lo Ting was able to survive and roam between two different worlds, the embodiment of a typical Hong Konger. Having to flee to Hong Kong, and to turn this unfamiliar place into a home is the manifestation of a Hong Konger’s experience. So I conceived an exhibition about the past, present, and future of Hong Kong’s history, titled Hong Kong Incarnated: History, Community, Individual, which opened at Hong Kong Arts Centre on 30 June 1997. It was the night before the 1997 Handover of Hong Kong, which took place across the road at the Hong Kong Convention and Exhibition Centre.

The exhibition was split into four parts. The first part, “The Prelude,” invited ninety-seven local art practitioners to create small works that responded to the Handover. In the centre was a small temple with a door that said, “You’re On Your Own—Good Luck! (自求多福).”

“Individual” commissioned three art practitioners to converse with the residents of Sham Shui Po and understand their perspectives on the Handover. This was because most of the opinions that we had been hearing about the Handover were from the elite and the middle class. Therefore, the exhibition aimed at showcasing some of the viewpoints from the grassroots community.

“Community” was originally set up to collect items for a Hong Kong Memorial Hall in the year 2047. It invited the general public to lend items they believed to be memorable and representative of Hong Kong, to be placed in a time capsule after the exhibition closed, and be displayed again fifty years later. Other than typical Hong Kong citizens, celebrities such as Emily Lau and Anthony Wong also lent items for the exhibition, creating a simple and fragmented impression of colonial Hong Kong. It was a pity that we couldn’t find a place to bury the time capsule. Though we had to return the items after the show closed, the exhibition was still able to feature items that represented our different recollections of the city.

If “Individual” was related to the present, and “Community” extended it to the future, then “History” was the core, as both the present and the future were rooted in history. And Lo Ting was its centrepiece.

Sparse information, the lack of credibility of myths, as well as added metaphors and apocrypha over the years, means that the history of Lo Ting is an organically collaborative and creative endeavour. I invited academics, and art and cultural practitioners who cared about Hong Kong, to recreate our ancestral history, and to expand it according to the little information we had. This was not just mythical fabrication or invention; the supplementary information we added reflected what we thought were metaphors for Hong Kong’s unique cultural history.

This method of history-writing also challenged the subject itself: out of all the events of an era, what should be recorded as “History”? Who has the right and power to choose and write history? Must history be listed chronologically the way dynastic and monarchic wars were recorded? Could we record histories the way we do with mythologies, through the use of metaphors? Could history be written according to the general public’s perspective rather than that of an “academic expert”?

After devising the historical story, we invited a few local art practitioners to create archaeological artefacts according to the complete and combined history of Lo Ting. This newly created account of Lo Ting invited creatives to insert their own imagination. While these imagined artefacts would have increased the sense of authenticity, it would also be contradictory—but isn’t history always full of contradictions, blurring the real and unreal? For the exhibition, we commissioned artist Wang Hai to paint the Massacre of Lantau Island from 1197, an event that happened but was never documented in the history of Hong Kong. In the end, it was up to the audience to decide whether “History” was real or not.

“Truth becomes fiction when fiction is true; the real becomes not-real when the unreal is real.” 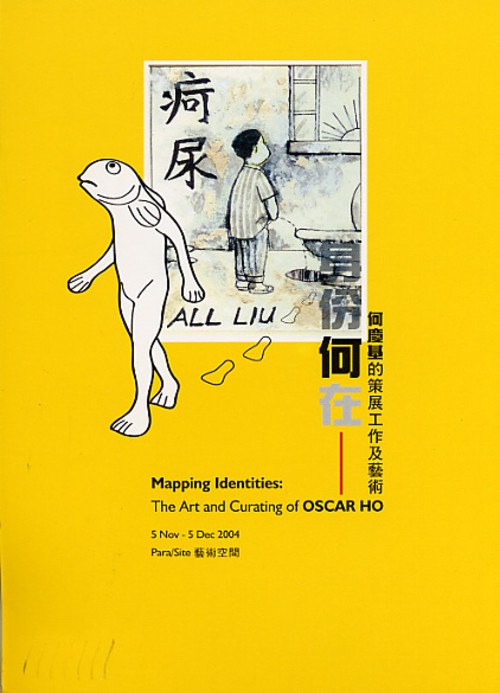