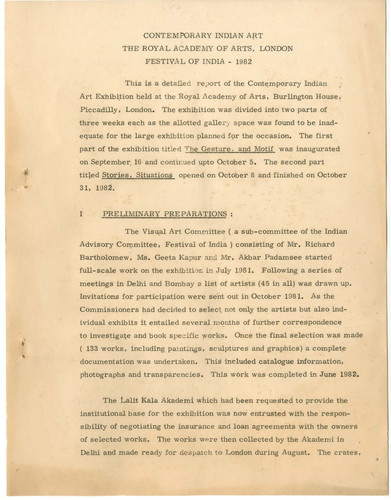 'Contemporary Indian Art' was an exhibition held at The Royal Academy of Arts in 1982 as part of The Festival of India. The exhibition was conceived and brought together by The Visual Art Committee (a sub-committee of the Indian Advisory Committee, Festival of India), consisting of Richard Bartholomew, Geeta Kapur, and Akbar Padamsee. The show was divided into two parts of three weeks each. The first part of the exhibition, titled 'The Gesture, and Motif,' was inaugurated on 16 September and continued up to 5 October. The second part, titled 'Stories, Situations,' opened on 8 October and closed on 31 October 1982. 45 artists were represented in the exhibition, with 133 artworks on display.

Contemporary Indian Art: An Exhibition of the Festival of India