Brochure for Asian Art Festival 'When petals fall like snow'

The Asian Art Festival was produced by Black Tent Theatre and held at the New National Theatre, Tokyo from October to November 2000. This edition of the festival was dedicated to the world of Kuo Pao Kun, the playwright. As part of this edition, Vivadi, the theatre company presented an adaptation of Kuo Pao Kun's Lao Jiu - The Ninth Born, as Navlakha. The performance was adapted by Geetanjali Shree, and directed by Anuradha Kapur. Nilima Sheikh was responsible for the visual design and painted sets along with Sumant Jayakrishnan and B.V. Suresh. Music was composed by Vidya Rao.

Brochure for Asian Art Festival 'When petals fall like snow' 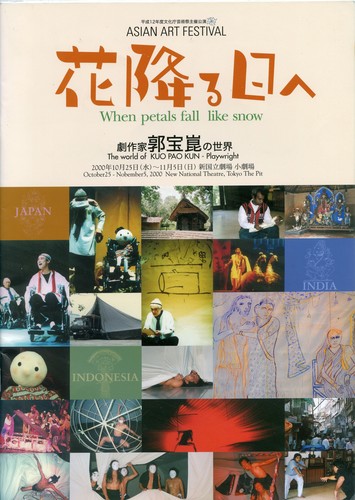