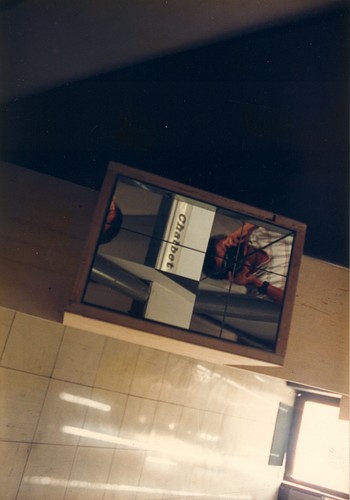 Photograph of the mirrored box in Roberto Chabet's Pictures in Ordinary Times, a two-part work exhibited under the same title at Finale Art File, Sunvar Plaza, Makati in March 1992.

The title refers to 'ordinary times', which in liturgical terms connotes the period after the 'strong seasons'. The two paintings that form the work are installed on opposite walls, directly facing each other.

One painting (shown in this photograph) is made from black plywood boards, onto which two unpainted plywood shelves, attached with metal brackets, form a caret-shaped wedge. On top of these boards are two objects, one is a box lined with mirrors, the other is a framed book that opens to a centre spread of shells.

The other painting is composed of a tree trunk attached onto the centre of black plywood panels and crowned with a wooden board and a red neon basketball hoop.