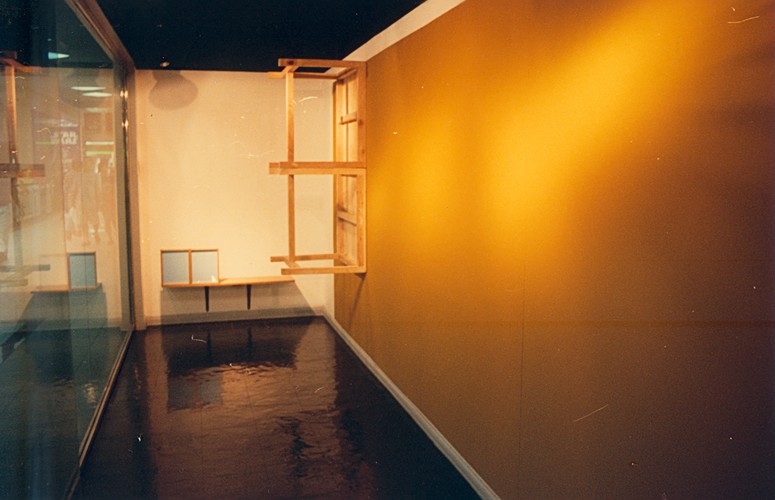 Photograph of Roberto Chabet's View of the Artist's Studio (Left Window, Right Window), an installation that continues a series of works entitled The Psychopathology of Everyday Life, which was began earlier in 1997 in two works shown simultaneously at Finale and West Gallery, SM Megamall.

The installation is composed of painted plywood panels, wooden tables, small box framed paintings, and a book with a photograph of Caspar David Friedrich's View from the Artist's Studio.

Chabet wrote, 'The present work examines the artist's studio - ubiquitous as a subject in modernist painting - as an allegory of the unconscious mind and contemplates it as a site for exilic silence, dreams and sudden, unexpected revelations.'

The work was exhibited in '2 of 4', the second of a series of solo exhibitions by Antonio Austria, Roberto Chabet, Fernando Modesto, and Danny Dalena, at Finale Art Gallery, SM Megamall from 20 May - 1 June 1997.

Plywood, acrylic, metal brackets, box framed paintings and a book with a photograph of Caspar David Friedrich's 'View From The Artist's Studio'