This catalogue is published by 16 bungee to accompany the exhibition 'New Generation | Chaegang JEON' at 16 bungee, Seoul, from 17 June - 7 July 2010.

'16 bungee is delighted to present a show of new works by Chaegang Jeon, who was awarded a prize at the 31st Joongang Fine Art Prize, Seoul, Korea in 2009.

'Jeon amasses the ready-made images that float on the Internet; then, paints her works, transforming and synthesizing the images. "Today’s Issues" is the title of Jeon’s series of works dated from 2008 to 2009, all armed and laden with irony. These works raise the veil of the invisible sanctions on the menacing issues of today’s world, creating, seemingly, a whole complete scene, comprised of images that are nowhere near reality. These works, brought together with a skilled and powerful technique that masterfully manages reality, become a compressed chronicle revealing how the new generation apprehends and digests images.

'In this show, about 20 new works developed from her previous works will be displayed addressing audiences the real issues of this generation.' (from website of 16 bungee) 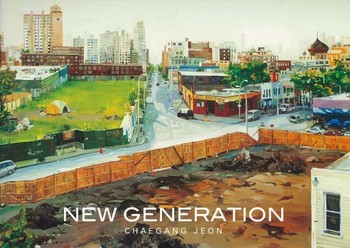