In an attempt to preserve and circulate the rich history of South Asia’s art writing, AAA commenced the Publications Project in 2013 with a line-up of research initiatives to map, compile, translate, and republish important texts on modern and contemporary art from the region. Inviting established scholars, educators, artists, and young researchers, AAA organised closed-door workshops, colloquia, public conferences, and research grants in collaboration with numerous partnering institutions and organisations, all focused on discussing the multiple histories and debates on art from twelve different languages.

Led by a Core Editorial Team consisting of Sabih Ahmed, Sneha Ragavan, Santhosh S., and Vidya Shivadas, the project explores genres including art criticism, monographs, poetry, travelogues, memoirs, and fiction writing that have contributed to shaping the sensibilities around modern art in the region.

In 2016, the Publications Project will bring out an assortment of Dossiers from various languages translated into English. The Dossiers will be published in hard-copy as well as freely downloadable on the AAA website.

Fields of Legibility: Disciplines and Practices of Art Writing in India
1. 6–7 February 2013, Kochi
A public conference & closed-door workshop organised in collaboration with the first Kochi-Muziris Biennale.

A closed-door workshop and colloquium organised in collaboration with The Sterling and Francine Clark Art Institute, Williamstown, Massachusetts, and supported by a grant from the Andrew W. Mellon Foundation.

The Art of Dissemination: Writing Cultures
A two-day colloquium organised in collaboration with the Centre for Studies in Social Sciences, Calcutta (CSSSC), on 13 and 14 February 2015 at the Jadunath Bhavan Museum & Resource Centre, Kolkata.

Inviting scholars and researchers from the social sciences, the colloquium was dedicated to the history of print culture in South Asia and its impact on visual arts evidenced in artistic, literary, and cultural journals that were published and circulated in the 20th century.

In Conversation with K.G. Subramanyan: An Illustration Workshop
A four-day workshop on illustration as a tribute to artist, writer, and pedagogue K.G. Subramanyan for FICA Homepage 2016 in collaboration with The Foundation for Indian Contemporary Art on 2–3 Aug and 5–6 Aug 2016 at the Vadehra Art Gallery, New Delhi.

The workshop engages students, young artists, and researchers to think through the language of illustration. Subramanyan’s deep engagement with illustrated books for children and adults will be used as a starting point.

The papers examine how the lives and afterlives of magazines affected perceptions, imaginations, and tastes surrounding art and culture in 1960s–1980s India.

This project has been generously supported by Thapar Public Charitable Trust. 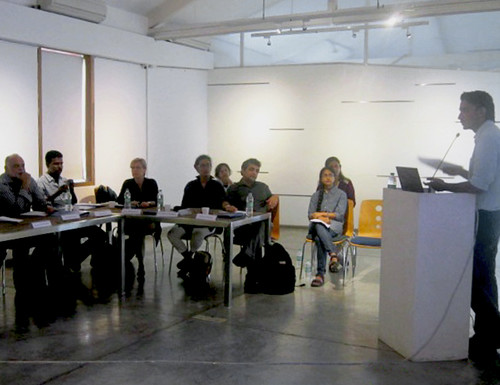