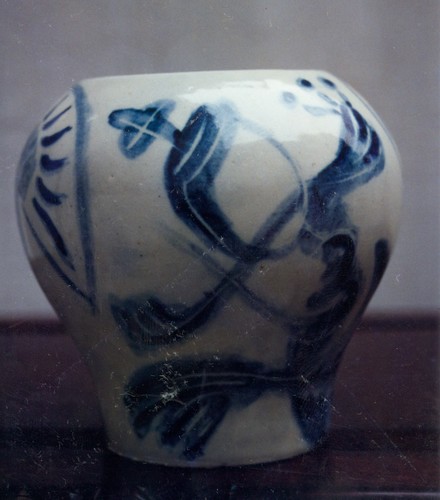 A ceramic vase painted by Mai Chi Thanh. It was presented at the group exhibition 'Céramiques D'Art' ('Art Ceramics') in Salon Natasha, 1996.

Starting from 1994, artists who had been actively engaged in Salon Natasha began to pay visits to Bat Trang, a traditional ceramics village located 12km away from Hanoi. The artists were given permission to work in different ceramic studios, but they later settled at an atelier of a young local artisan Nguyen Xuan Nguyen.
The production of ceramics remained artisanal at Bat Trang in the 1990s; the visiting artists were allowed merely to mould utilitarian vases or plates and to paint on them, without shaping and altering the objects themselves. Firing and glazing would be done by the studio-owners.
In 1995 the artists were particularly productive at Bat Trang, having committed to prepare for the exhibition ‘Céramiques D'Art’ (‘Art Ceramics’) organised by the Salon in February 1996.
Participating artists of the exhibition include: Eric Leroux, Le Hong Thai, Mai Chi Thanh, Truong Tan, Do Minh Tam, Bui Huu Hung, Le Tuan Anh, Maritta Nurmi, and other artists.